A 29-YEAR-old suspect was arrested on Thursday in connection to a brutal triple murder in Queens, according to police.

Travis Blake was caught in Bar Harbor, Maine, nearly one week after three decomposing bodies were found tied up inside a home.

Charges against Blake, who was arrested by members of the Regional Fugitive Task Force, are pending as he’s being extradited back to New York, NBC New York reports.

All three bodies were discovered at their 155th Street home in Queens on June 24. 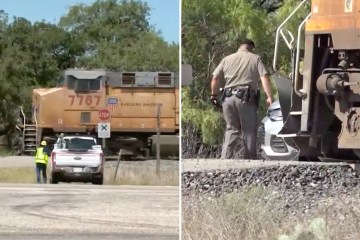 Brightly’s older sister Natasha told ABC7: “We don’t know when they were murdered.

“They were in the house days before they were discovered.”

Malcolm was found dead on a bed with apparent signs of trauma and puncture wounds to her chest inside a room on the second floor of the home.

Authorities said the bodies of Barnett and Brightly were discovered in the South Jamaica home’s basement.

Barnett was found with multiple stab wounds and Brightly had head trauma.

Police found the bodies at the scene after receiving a 91 1 call.

The motive for the killings is currently unknown and a court date has not been scheduled.

Blake’s arrest comes after police say he fled the home of the triple murder and made his way to Maine.

He was spotted on a home’s surveillance video, according to the Daily Mail.