RORY McILROY fluffed his lines after making a powerful statement at the start of the USPGA Championship – and suddenly finds himself playing catch-up.

McIlroy’s first round 65 was supposed to be the start of a victory procession at Southern Hills.

After all, on the last three occasions he opened a Major with a really low round, 66 or better, he romped to victory.

That was the story at the 2011 US Open, and the Open and USPGA three years later.

But that 2014 USPGA triumph was the last of McIlroy’s four Major victories, and these days he only occasionally looks like the player he was back then.

Sure enough, a desperately disappointing 71 in the second round this time left him five shots adrift of 36 hole leader Will Zalatoris.

Yet it was set up for a Rory rampage. The strong early morning winds dropped to a gentle breeze, and the players in McIlroy’s half of the draw gorged themselves on birdies, and scores in the mid-sixties. 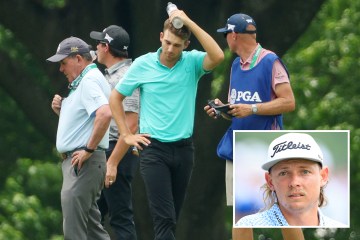 If he is going to come from behind and end the Major drought, McIlroy, 33, is going to have to buck the trend at Southern Hills.

All seven previous Major winners at the Tulsa course have been in the top two at halfway.

The last of those winners was Tiger Woods, at the 2007 USPGA.

Woods, 46, has already won his private battle by making the cut this week, despite the obvious agony from the right leg he shattered in a life-threatening car crash 15 months ago.

Most read in Golf

The 15 time Major champion gritted his teeth and added a one under par 69 to his opening 74 – and just as he did at Augusta he booked his ticket for the final 36 holes.

Justin Thomas had been delighted at shooting a second successive 67 to grab the clubhouse lead at six under par – although he finished almost an hour before McIlroy and Co teed off and is now three shots off the top.

The crumb of comfort for the players who failed to make it into the final pairing are that the first two at Southern Hills this time are a couple of players who have not managed a single win on the PGA Tour between them.

Zalatoris has already gone close to choosing a Major as the perfect opportunity to  open his victory account, as he was runner-up in the Masters last year. But despite showing he can mix it in elite company, he is still waiting for his first win.

He will tee off in round three alongside little known Chilean player Mito Pereira.

His main claim  to fame so far was to finish in  a seven way tie for third at the 2020 Olympics, although he failed to claim the bronze medal in the m,as play-off.

Pereira shot 64 to charge into contention, while Zalatorius added a 65 to his opening 66.

McIlroy will need to produce that sort of round today to chase that pair down, despite the fact that they have yet to show they can get over the line.