Stuck on what to watch this week? Nós vamos, look no further. The Sun has got you covered with the best new TV shows to stream this week.

Prepare to laugh, cry, and jump out of your seat this week with new and returning shows like Greys Anatomy, The Watcher, and Devils Hour.

The gritty US medical drama will never get old.

The show first swept onto our screens way back in 2005 and it’s now in its 19th season, with Meredith Grey (Ellen Pompeo) and her colleagues still juggling the pressures of working in a hospital with trying to maintain some semblance of a successful personal life.

Available to watch from Wednesday

With the Women’s Rugby League World Cup just days away, this documentary meets some of the women battling it out for a place in the England squad.

Without exception, they’re an inspirational bunch, not least because Women’s Rugby League remains an amateur sport, which means the players have to juggle their rugby commitments with holding down jobs.

From HGV driver Chantelle Crowl to working mum Amy Hardcastle, who supports teenagers with their mental issues, they work hard and train hard, all desperate to be part of coach Craig Richards’ plans. 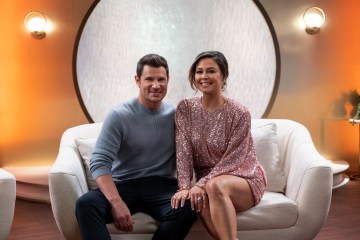 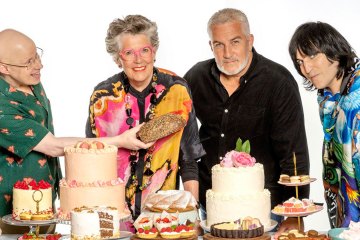 This spooky film is another must watch.

Fans of Tim Burton’s classic animation The Nightmare Before Christmas must not miss this brilliantly creepy new stop-motion treat from Jordan Peele and Henry Selick.

When two demon brothers, Wendell (Keegan-Michael Key) and Wild (Descascar), persuade streetwise teen Kat to summon them to the Land Of The Living, it sets the unlikely trio off on a fantastical and gloriously spooky adventure.

Available to watch on Friday

Shocked film fans discover these stunning actresses have something in common

The new Netflix horror that will scare you silly. It’s the perfect Halloween watch.

Boasting an impressive cast across the series’ eight stand-alone episodes – we’re talking the likes of Andrew Lincoln, Rupert Grint, Dan Stevens, Foxy Jacks. Murray Abraham and Crispin Glover – it’s a gruesome and grotesque collection of tales that are guaranteed to send shivers down even the bravest of spines.

Available to watch from Tuesday

The animated Star Trek spin-off returns. The young crew of the USS Protostar are back for another ten episodes of colourful, action-packed animated sci-fi fun. Having escaped the clutches of The Diviner, Dal (Brett Gray), Gwyn (Ella Purnell) and the gang make their way towards Star Fleet.

But the discovery of a terrible weapon onboard the ship – plus the pursuit of the real Vice Admiral Janeaway – ensures that there’s a bumpy ride ahead.

Appealing to seasoned Trekkies and inquisitive kids alike, Star Trek’s decision to boldly go in a younger direction for the first time has definitely paid off.

In her creepy but compelling new crime thriller, Jessica Raine plays a troubled mum called Lucy who wakes every night from a nightmare at exactly 3.33am.

In The Devil’s Hour, Jessica stars alongside the definitely very real Peter Capaldi.

He plays mysterious and terrifying loner Gideon, who appears to have murderous designs on Lucy and her son young son.

At the heart of the show, there are several claustrophobic scenes that see Lucy interrogating Gideon, and vice versa.

Expect spooky thrills galore with this mystery horror series about a group of terminally ill teens at a hospice who meet each evening at midnight to tell each other terrifying stories.

But before long, they uncover evidence of cults, sacrifices and ghostly goings-on at the hospice. Another brilliantly spooky watch.

Gael Garcia Bernal stars in a one-off based on the Marvel Comic of the same name.

When their leader dies, five monster hunters set off on a special hunt which will determine who will take charge. Suspenseful and stylishly shot in black and white, it’s an electrifying Halloween treat.

Tired of being a goody two-shoes, comedian Sue heads off on a daring three-episode journey across South America to meet the locals, hear how they live and maybe even try out something adventurous, dangerous and barely legal.

A celebrity travelogue with a twist.

Part two of the second series of this superior comedy has landed, with alien in human form Harry (Alan Tudyk) continuing his latest quest – to protect the people of Earth from a different batch of nasty aliens.

But will he recover from being shot? Funny and insightful.

Inspired by real events, this true crime drama series centres around couple Nora and Dean Brannock (Naomi Watts and Bobby Cannavale), who move into what they hope will be their dream home, only for it to turn into a nightmare thanks to a stalker who calls himself ‘The Watcher’.