THE THIEF, His Wife and the Canoe viewers spotted a familiar face in the final instalment of the ITV drama.

John and Anne Darwin were brought to justice as the true-life drama came to its conclusion on Wednesday night.

The series followed Anne Darwin becoming complicit in her husband John’s deception as she starts to convince the world that he has gone missing in 2002, while canoeing off the coast of Seaton Carew in Cleveland.

In the final episode, Anne and John grilled are by detectives and accused with a long list of crimes.

At first Anne denied having any knowledge that her husband John had faked his death.

But Anne realised she couldn’t lie any longer, she confessed the entire truth to the police. Later, John did the same.

MORE the thief, his wife and the canoe

The Thief, His Wife and the Canoe boss hits back at complaints

Who is John Darwin’s ex-wife Anne and where is she now?

The Thief, His Wife & the Canoe viewers open-mouthed as they spot comedian cameo

The Thief, His Wife and The Canoe viewers thrilled to spot Heartbeat actor

Scenes showed John and Anne reconciled in jail. John threw his arms around his wife and began kissing her. He told her: “I forgive you, Anne. I really do”.

After both went to trial, Anne was sentenced to six years and six months in prison, while John was given three months less.

Egter, viewers were distracted because they recognised a familiar face during the interrogation scenes as one of the detectives was Coronation Street and The Bill star Andrew Lancel.

He played villainous businessman Frank Foster on the ITV soap and DI Neil Manson on the police drama.

The 51-year-old actor will be appearing in the upcoming films
Ian Puleston-Davies’s Bolan’s Shoes and Karlton Parris’s Wings both released in 2022. 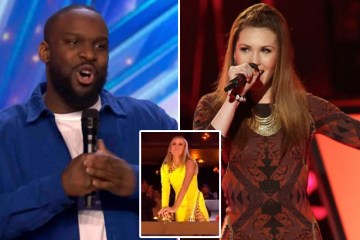 Neem na Twitter, het een kyker gesê: “Omg did anyone else spot DCI Neil Manson interviewing John Darwin? Or am I just a die hard fan of The Bill?”

The Thief, His Wife and the Canoe boss hits back at complaints

The Thief, His Wife and The Canoe is available to watch now on ITVhub.