THE Queen’s favourite mount stood among a sea of flowers as Her Majesty entered her journey’s final furlong.

Fell pony Emma waited among a carpet of the public’s floral tributes at the side of the Long Walk as her owner was driven to her resting place.

Beside her stood the Queen’s head groom, Terry Pendry, who bowed as the royal hearse passed them on its way to St George’s Chapel at Windsor Castle.

He wore a bowler hat, riding boots and black jacket while Emma beside him had on a riding blanket bearing the monarch’s EIIR cypher.

The moving moment perfectly captured the late ­monarch’s passion for all things equestrian.

She learned to ride as a very young girl and, until recently, took Emma out in Windsor Great Park accompanied by Mr Pendry — one such occasion being on her 91st birthday. 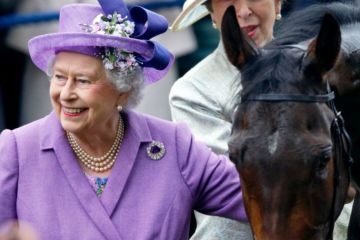 Who is the Queen’s black horse Emma and how many racehorses did she own?

Two years ago, Mr Pendry declared that Emma “has been a wonderful servant to Her Majesty and is still going strong at the age of 24”.

The Queen, who was patron of the Fell Pony Society, was also a passionate racehorse owner and breeder.

She loved days at the races, missing the Epsom Derby only three times during her reign.