BBC presenter Huw Edwards appeared to take a cheeky swipe at Phillip Schofield and Holly Willoughby as a row about queueing rumbles on.

The 61-year-old became the latest famous face to make a dig as he discussed football legend David Beckham’s 13-hour wait to see the Queen’s coffin.

Meanwhile Holly and Phil have faced huge criticism after they were seen at Westminster Hall where the Queen was lying-in-state – without joining the long queue like David and Susanna Reid.

Speaking on the BBC last night, Huw said: “There have been quite a few familiar faces in the queue for that lying in state at Westminster Hall.

Good Morning Britain host Susanna also made a pointed remark about queuing with her 81-year-old mum for seven hours. 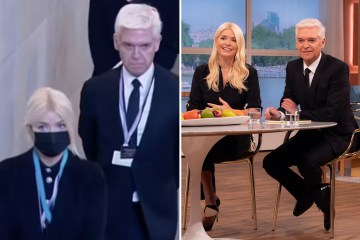 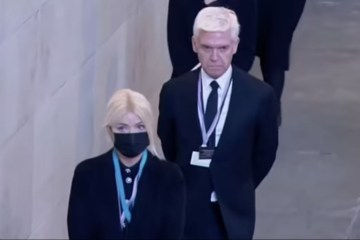 She continued: “Whether you are religious or not, a royalist or not, it feels like a sort of pilgrimage, and a historic moment, a historic opportunity.

“When I was in the queue, young children, patiently and uncomplainingly stood for hours. I was so proud of my mum at 81 queuing with me.”

She wrote: “There’s a VIP queue?” which appears to be in reference to Phil and Holly’s queue jump controversy.

Eamonn Holmes also liked a Tweet from a fan who said: “Does this mean we can have Eamonn Holmes and Ruth Langsford back on @thismorning please?!”

ITV insists they “did not file past the Queen’s coffin”, but were being escorted to work from the press gallery by government staff.

“Any allegations of improper behaviour are categorically untrue,” an ITV spokesman said, as they explained the presenters were working as journalists at the historic event.

However, fans are still claiming they won’t be watching when the daytime show returns on Tuesday.

Some 8,000 angry viewers have already signed a petition to have Holly and Phil sacked.