LOVE Island viewers turned on Amber Beckford last night after she took a swipe at Dami Hope in a brutal recoupling speech.

The pair got off to a promising start after viewers coupled them together, however, in recent days things have cooled, and it’s become clear they aren’t a match made in heaven.

Fans of the show had to listen to Amber’s recoupling speech twice after she made a jibe about him irritating her.

She said: “I decided to couple up with this boy because the amount we laughed last night I thought I would wake up with abs and, although he’s got on my nerves in the last couple of days, I’ve seen where we can take things in the future, and I’m excited to see where we take things.”

One fan wrote: “I actually had to rewind Amber’s recouping speech because I didn’t think I heard it right. She really doesn’t like Dami.”

Another said: “Catching up on Love Island from last night…Amber is straight up bad vibes! That speech she gave when she coupled up with Dami was horrible!”

A third posted: “Lmao amber the same one who said her speech about Dami was embarrassing. She needs to buzz off.” 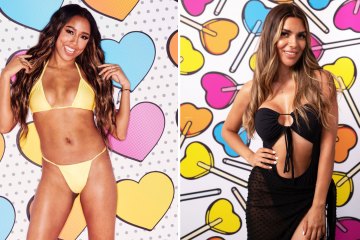 There had been clues leading up to the speech that the couple lacked chemistry.

Last week when it was revealed the hideaway was open for business, Amber surprised fans by nominating Tasha and Andrew to enjoy a night in there rather than her and Dami.

Others pointed out that Amber’s face didn’t look particularly excited when the hideaway text was received.

Ekin-Su waded into the drama last night, telling Dami she knew that Amber wasn’t the girl for him as she encouraged him to pursue things with Indiyah Polack.