The fashion house, at least, are said to want him to make regular appearances in their clothes. 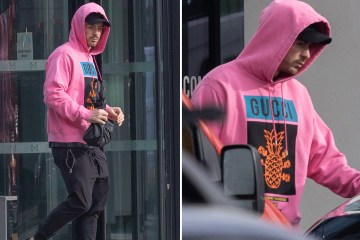 After all, when David Beckham first showed off the tattoo of a flying thing across the back of his neck, many of us recoiled in disgust.

So, I wonder why he has not been knighted — whether those tattoos have anything to do with it?

Grealish has barely put a foot along that course yet. He’s a brilliant ball-player who provokes defenders to try to knock his little shin pads into the back row of the stands.

Generally, he smiles afterwards — although he has been known to face up to the assailant.

Whether he moves gradually up the superstar league might well depend on his father, Kevin, who also acts as his agent.

He did fashion on the way, from tight underpants to dinner suits, and others including Hector Bellerin, Marcus Rashford, of course, Cristiano Ronaldo, are on a similar course whether or not they sport tattoos.