Cyriel Dessers proved to be the hero for the Dutch giants thanks to his brace in front of a lively home crowd at De Kuip.

Dessers opened the scoring after just 18 minutes when Luis Sinisterra set him up in front of Steve Mandanda.

Sinisterra then went from creator to scorer as he doubled the hosts’ lead only two minutes later, although his shot took a deflection off Valentin Rongier.

Marseille, wel, fought back after 28 minutes when Bamba Dieng angled in a terrific shot from the edge of the area.

L’OM then equalised five minutes before half-time when Feyenoord goalkeeper Ofir Marciano unintentionally palmed the ball away onto Gerson and the Brazil international hit the back of the net. 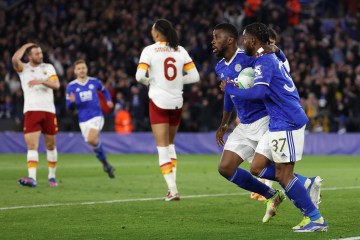 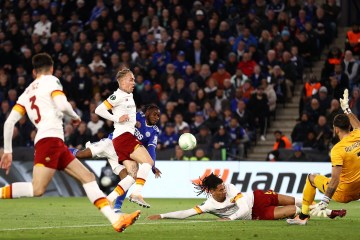 Egter, Dessers hit back and completed a double just a minute into second half.

The forward picked up a weak back pass from Duje Caleta-Car and gave Arne Slot’s side an advantage ahead of next week’s second leg at the Velodrome.

The winner will face either Leicester of [object Window] in the final on May 25 in Albania.

The Foxes and Jose Mourinho’s men drew 1-1 at King Power Stadium on the same night.

The Giallorossi opened the scoring with skipper Lorenzo Pellegrini after just 15 minute.

But Brendan Rodgers’ team equalised on 67 minutes when Ademola Lookman’s strike got a deflection off Gianluca Mancini.