A DOG guarded her owner for 36 hours after he fell 200ft down a ravine — then got walkers to raise the alarm.

Loyal Suki copied the heroics of TV and film collie Lassie to save seriously-injured Martin Clarke, 76.

She refused to leave his side until she spotted Tom Wykes, 57, wife Danielle, 53, and their family.

Saluki-collie cross Suki ran to them then back to Martin.

When they failed to follow, she did it again and finally led them to Martin propped on a rock in the River Esk at Lealholm, North Yorks.

Tom said: “If it hadn’t been for Suki I don’t think he would have made it. She’s a clever and loyal dog. It was very reminiscent of Lassie. 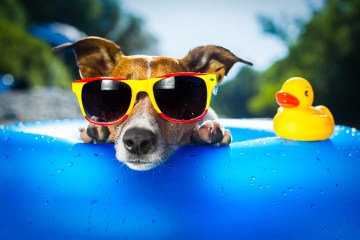 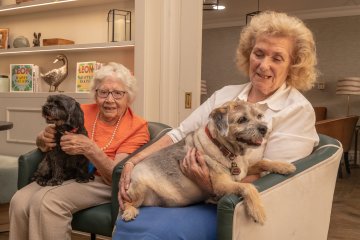 “Martin fell on Tuesday morning, en juillet 27 and we didn’t find him until Wednesday evening.

“People said Suki had been howling but no one could pinpoint her.

Some of his family got help and farmer Martin Ford used a chainsaw to clear a path in undergrowth so 27 members of Cleveland Mountain Rescue could reach the ravine.

Papa britannique, 35, dies after being ‘beaten and knelt on by Magaluf bouncers’

Walker Martin, de Nottingham, had surgery for chest, épaule, back and leg injuries.

Mr Ford, who runs a nearby campsite, is looking after Suki while Martin recovers in hospital.

Il a dit: “Martin was staying with us and went for a walk but somehow fell from the path. He’s been very fortunate.

“Suki is lovely. She has a very pleasant nature. It’s obvious she’s missing her owner.”