LOCALS say their seafront views are ruined by selfish tourists who park caravans in front of their windows – and fines don’t stop them.

Visitors to the quaint yet popular seaside town of Seaford, East Sussex, have also been blamed for causing parking nightmares, setting bins on fire and littering benches.

They’re said to leave tonnes of rubbish strewn along the beautiful beach, while piling black sacks of trash close to bins during the summer months.

Craig Peachey, 55, a local NHS worker, aan The Sun Online gesê: 'Day trippers are attracted here by the lovely beach and the fact it is free parking but they do not treat the place with respect.

“Litter is left strewn everywhere and they park all over the place, on double yellow lines, across people’s drives and on the grass verges.

“It gets impossible down here during the somer. 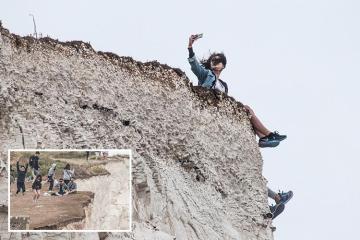 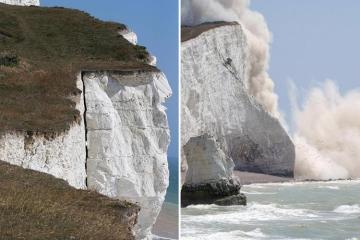 “They use disposable barbies and then dump them on the bins causing fires. It is pretty dreadful.”

Hy het bygevoeg: “I’ve seen large camper vans park up on the road, whole families pile out and then open out huge awnings – taking up car parking spaces to do so.

“They then proceed to set up a full-scale kitchen to cook up a meal – it’s just so antisocial.”

“You get people flocking down from Londen and they really don’t care about the area. They chuck their rubbish everywhere and park all over the place. It’s shocking.”

Along Marine Drive there are clear signs barring caravans from using the free parking – but there is no ban on motorhomes or camper vans.

There is also the threat of a £70 fine for any vehicle longer than 5.5metres using the parking – but many still flout the reëls.

Tim said: “I’ve seen people – probably from London – get a ticket for £70 and say: ‘Oh that’s not bad for a day’s parking’ because that’s what they’re used to in London.

“People have been blocked in their driveways, unable to get their cars out by tourists who have parked up for the day.

“The council needs to patrol the seafront but they don’t and so everyone rides roughshod over the rules and because they’re not from round here they don’t show the residents, the beach or the surrounding roads any respect.”

Aan Facebook, resident Bob Steer said: “Recently there has been a trend to erect tents on the pebbles and make encampments looking at times like Glastonbury Festival.

They chuck their rubbish everywhere and park all over the place. Dis skokkend.

“Many of them staying overnight and some bonfires and barbecues.”

He said the beach attracts a huge variety of visitors in the summer – from sunbathers to gangs of fishermen.

Bob, who lives on Marine Drive, gesê: “At the end of the day we have to be tolerant with the seasonal influx.

“Our suggestion is to create a group of ‘Beach Wardens’.

“These would be friendly advisers, perhaps volunteers, who amongst other duties could inform those who infringe the laws.

“We can still be a relaxed and welcoming community but we think more attention should be given to these matters.

“It is our town after all and we are the custodians.”

TOP OF THE RANGE

“If they lived here then they would care about what goes on here.”

The Sun Online has approached the Seaford Town Council for comment.