FANS have ripped Jenelle Evans for preparing lunch with no nutrition for her kids.

The Teen Mom 2 alum has faced relentless backlash over her parenting practices.

Now fans have slammed Jenelle, 30, for packing an all-brown lunch for her son Kaiser, eight, and daughter Ensley, five.

The reality star took to her TikTok profile on Tuesday to share a video of herself making lunch for her children.

The TV personality began with a selfie and then a snap of a bouquet of red roses that she received from her husband David Eason, 34.

“Let’s make my kids lunch! And check out these roses that David got me yesterday, he’s a sweetheart,” Jenelle said, narrating her video. 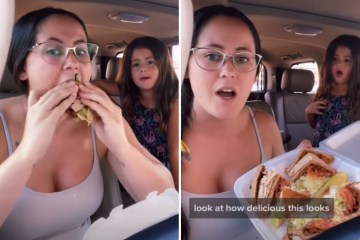 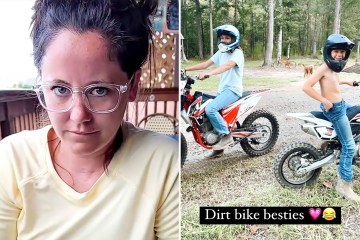 The mother of three then filmed herself opening up personalized lunchboxes for her two youngest, and setting out trays to fill with food.

“First we start out with some chickpeas and they’re honey roasted,” she explained, dumping the snack into one of the portioned sections.

“Next I added them a sweet cookie,” Jenelle continued, smashing the dessert to fit into the box.

The TV star laughed: “I should’ve added grapes but I added pretzels instead.

“Next I added a ham and cheese sandwich to both of their packs,” she added, smashing the crunchy bread to also fit in the container.

Jenelle then zoomed in so fans could see the nearly-completed lunch, consisting of only brown items.

After closing the Tupperware container, the MTV star added it to the lunch box, and then put a freezer pack on top to keep it cold.

“It was Kaiser’s idea to get some peas for lunchtime,” she giggled, crediting her eight-year-old son for the one healthy item in the bunch.

“I don’t know he’s obsessed. And then we give him a granola bar for snack and they have a little mini sprite,” Jenelle continued, then filming herself as she zippered both lunchboxes closed.

The North Carolina native closed out the clip as she handed both kids their lunches before heading out the door.

But fans were shocked by the young mom’s food choices, racing to Reddit to slam her for not including healthier options.

“Another all-brown lunch for the kids,” one wrote, noting that this wasn’t the first offense.

“‘It was Kaiser’s idea to have peas for lunch.’ Your kid is literally begging for a vegetable, Jen,” a second trolled.

“He’s begging for proper nutrition. And Jenelle is like ‘best I can do is these pre-packaged cold peas in water,'” a third noted.

“She can’t be bothered to prep some proper fruit and veg for her kids. Literally celery, carrots, or snap peas would be so much cheaper than those pre-packaged grey-green peas she added. Only problem is that it would require effort.”

A fourth ranted: “Ya that looks f**king disgusting. There’s other vegetables aside from peas in a fruit cup served COLD. You monster…..”

Student made chilling prediction about ‘being murdered’ before disappearance

“I guess she did add some green at the end, since poor Kaiser is clearly begging for some nutrition. Pre-packaged cold peas in water. And the Sprite, that probably counts as green. The way she smashed that cookie up into the container to make it fit…” a fifth remarked.

“Are we supposed to be impressed that she feeds her children? Also, those peas look horrifying. Has Jenelle ever heard of fresh food?” a final complained.