THE family of a “beautiful” woman who died in a horror crash have paid a touching tribute to her.

Eka Schofield, 33, from Penryn, west Cornwall, died in hospital after a collision involving a Volkswagen van and a pedestrian at around 9.35am on June 24, police said.

The accident happened on the A39 between Treliever roundabout and Kernick Road Industrial Estate, Penryn.

Eka’s family have paid a touching tribute to her, saying she was an “amazing” person.

They said: “She was beautiful inside and out. She was the most amazing person and there will be a massive hole left forever for all that knew her.

“We would like privacy for our friends and family to grieve at this difficult time. Thank you.” 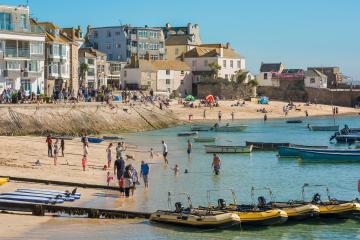 Tourists told NOT to book holiday homes in Cornwall this summer

Cops are continuing their enquiries to establish the circumstances of the collision.

A GoFundMe page has been set up by a friend of Eka’s husband Zev to help pay for the funeral and other expenses.

Zev and Eka got married less than a year ago, according to the post.

The post said: “With all their future ahead of them, dreams, plans all gone. Life is so precious, hold it tight because nothing could have prepared Zev and his family for this.”

It added: “While Zev is processing his grief, what else can we do? We know nothing of his pain and no words can bring his beautiful Ekaterina back, but we can stand alongside him and support him.

Financially they would have been unprepared for this as they where just starting their lives together.”